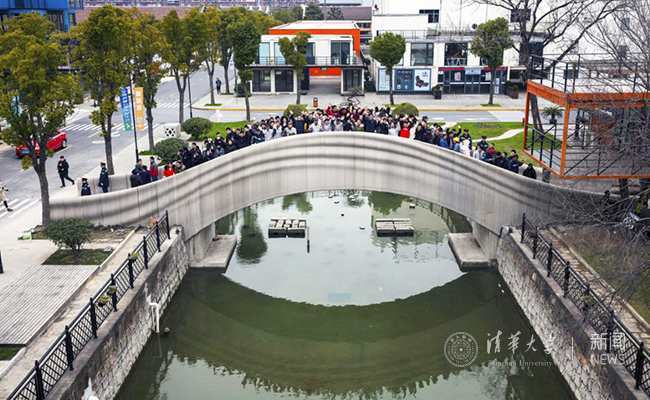 A new project on the Tibetan plateau is aiming to build a hydroelectric dam by means of artificial intelligence (AI) and 3D printing in just two years.

According to reports, the dam will be constructed entirely by AI-powered robots which will act as a giant 3D printer to build the 180-meter structure layer by layer.

While details of the exact additive manufacturing process used for the project are scarce, scientists involved in the project said the technology had matured enough for mass “large, filled infrastructure” applications.

The construction 3D printing field has grown significantly in recent years as pioneering firms like ICON and COBOD continue to make improvements to their technologies and new players enter the scene. Many of these are making rapid progress in scaling up their machines and processes, and as a result additive manufacturing is being leveraged for increasingly larger builds.

This year alone, Oak Ridge National Laboratory (ORNL) patented its novel ‘SkyBAAM’ cable-driven construction process capable of 3D printing entire buildings while suspended in mid-air. Developed as an alternative to gantry-mounted concrete 3D printers, the SkyBAAM printer enables a nozzle to be deployed and operated via pulleys in order to eliminate the need for time-consuming site preparation required when using gantry systems.

The successful patenting of the technology did raise the eyebrows of two of the industry’s leading open-source 3D printing advocates, however, who claimed ORNL’s design copies an earlier Hangprinter concept.

In March, meanwhile, robotics start-up Diamond Age raised $50 million to accelerate the development of its own robotic 3D printing construction system. Once complete, the system will contain 26 end-of-arm robotic tools with 3D printing capabilities capable of automating the process of building new homes.

Flagged as the world’s first 3D printed dam, the Yangku Hydropower Plant will be constructed over the Yellow River and stand at 180 meters high. Once completed in 2024, the dam will reportedly be capable of generating some five billion kWh of energy and will provide electricity to 50 million people in Henan Province and the surrounding areas.

The dam will not be built only by using human workers, though, as robots will be deployed to autonomously construct the hydropower plant over the course of two years.

While perhaps the largest in scale to date, the Yagku hydropower plant is not the first infrastructure project in which China has deployed additive manufacturing. Last year, Tsinghua University’s School of Architecture successfully constructed a 3D printed concrete bookstore in Shanghai’s Wisdom Bay Innovation Park, and in July a 3D printed retractable bridge capable of unfurling in less than one minute was also unveiled in the city.

Elsewhere in Shanghai, a 15-meter-long pedestrian bridge was 3D printed as part of a project conducted by 3D printing filament producer Polymaker and construction firm Shanghai Mechanized Construction Group Co as a demonstration of pollution-free construction and ‘smart’ technology.

Construction additive manufacturing technology is continually improving and finding applications not only for the production of affordable homes and commercial buildings, but also for a variety of other infrastructure projects.

For instance, 3D printing has previously been deployed for the production of recyclable 3D printed footbridges and the design of circular viaducts, as well as for the building of eco-friendly sewage infrastructure.

In a more out-of-this-world approach, ICON and NASA are working together to develop 3D printed moon infrastructure as part of Project Olympus, and unveiled the world’s first 3D printed rocket pad midway through last year.

3D Printing Industry’s recent ‘Exploring 3D Printing’s Emerging Construction Industry’ webinar looked at the inroads the technology has already made into the wider construction sector and the future potential of this emerging field.

Subscribe to the 3D Printing Industry newsletter for the latest news in additive manufacturing. You can also stay connected by following us on Twitter and liking us on Facebook.