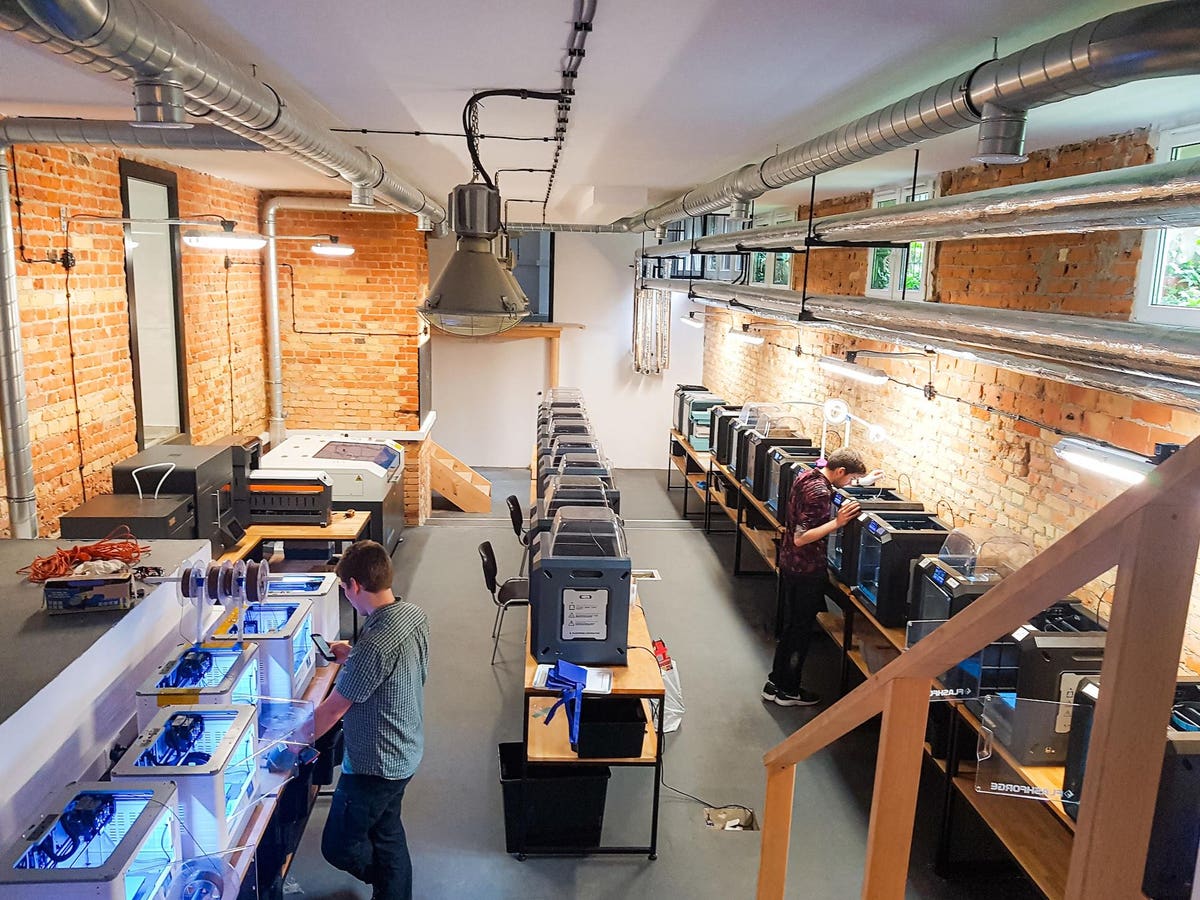 Entrepreneurs in Poland rush printers to the stricken neighboring country for use creating protective gear, tourniquets, periscopes—and even drones—for the Ukrainian defense.

On the weekend after the Russian assault on Ukraine began, Andrzej Burgs, founder and CEO of Warsaw-based 3D printing firm Sygnis, heard from his industry friends at 3D Tech Group in Lviv. With their country under attack and all kinds of supplies needed, Pavlo Yesyp and Michail Shulgan asked, could Burgs help supply 3D printers and materials to fill the gap?

“We said, ‘Okay, we can do this for you, no problem,’” says Burgs, whose own relatives live in countries including Poland, Ukraine, Russia and Belarus. “It’s obvious for us that it’s in our common interest to defend Ukraine against Russia.”

Soon, he’d filled a bus with 20 printers and more than 800 pounds of the raw printing material called filament to send across the border to Lviv in western Ukraine. The journey was arduous, and after being stopped at the border for three days, Burgs recalls, one of the guys who helped drive there got a tattoo of the bus to remember the moment.

In wartime, 3D printing is hugely helpful because of its flexibility and speed, which reduces the logistical nightmares of transporting needed supplies. Many 3D printers are relatively small and can be set up in basement bunkers, ideal for wartime production. Then, too, the technology allows parts to be produced at scale in multiple locations at a time, and for the designs for parts to be shared digitally among multiple facilities or individual producers, making it, in some sense, designed for use during a crisis or war. The printers that Sygnis sent to Ukraine print polymers or plastics, allowing the production of protective equipment, tourniquets, periscopes and other needed supplies. But getting the printers to Lviv was just the start.

Simultaneously, two other Poles involved in the technology industry had been working on how to use their capabilities to help Ukraine. Agnieszka Kranz, who runs a nonprofit called TeenCrunch that helps teens build startups, figured she could use her organizing savvy in the tech community to create a bigger 3D printing effort. She soon teamed up with her friend Aleks Ciszek, founder and CEO of 3D printing startup 3YourMind, and Burgs, who had previously been a mentor at TeenCrunch. Together, they started an initiative called Tech Against Tanks, feeding off the comment by Ukrainian Minister of Digital Transformation Mykhailo Federov that “tech is the best solution against tanks.”

To date, the volunteer effort has printed more than 10,000 items, including protective gear, tourniquets and drones.

The three figured that they could do more than just send a one-time supply of printers to Lviv. Instead, they planned to mobilize the wider community of makers in Europe to print needed items from open-source designs; garner support from larger 3D printing companies in Europe and the United States; and raise funds through donations for maximum impact. Kranz, who organized the initiative and is leading the fundraising, says they’ve raised more than $50,000 with hopes of bringing in more than $350,000 from individual donors and organizations. Burgs also has access to 70 of his company’s 3D printers at facilities in Poland.

To date, Burgs says, the initiative has created 10,000 parts and items for Ukraine, including protective gear, tourniquets, periscopes and even drones. “Every day, we can do more and more because more companies join our team and we have a Slack for this project,” he says. “We have maybe 1,000 printers, and now we are waiting for specific directions from Ukrainian defense which parts we need to print. . . . With 1,000 machines we can print 10,000 parts a day, to be honest. It’s that kind of possibility for the future.”

Longer term, Kranz wants to use the organization to help war-torn countries beyond Ukraine that have supply gaps that could be remedied with 3D printing. “Most of the countries I have in mind, Syria or Congo, also have a shortage of many things,” she says. “The world is not so supportive of those areas, and if we can help them through helping Ukraine it will have a much bigger impact.”

There are some downsides to the group’s 3D-printed items. They’re made with plastics so they may be less durable, and since they’re not mass-produced they may be more expensive than factory items. But in an emergency, those downsides are far outweighed by the upsides. “This is a conditional thing,” Kranz says. “So, yeah, for example, these drones may not fly for 20 years, but they will fly for 40 days. We don’t need to produce something that is forever in this case.”

In many ways, that makes the group’s efforts similar to those of the 3D printing community in the United States and Europe at the start of the coronavirus pandemic two years ago. At that time, items that could help mitigate the pandemic, like nasal swabs and face shields, were in short supply. Numerous 3D-printing firms stepped up to help. “We have leveraged a little bit of our experience from the pandemic,” says Ciszek, a Forbes 30 Under 30 Europe alum.

The group put out a call to 3D printing aficionados throughout Europe to create the needed plastic items quickly. Many of these items are simple: protective gear, tourniquets, prosthetics and the like. The makers who join the effort get open-source recipes for the parts needed and then send them to a distribution center in Poland. Since the traditional logistics partners, such as DHL and UPS, can’t get parts to Ukraine, the group has set up its own logistics process, the details of which Ciszek says he cannot disclose due to security.

Ciszek says he is also reaching out to larger 3D printing companies, such as EOS and HP, in an effort to convince them to take part in the effort. “To have impact, we have to scale and mass-produce a lot of parts quickly,” he says.

At the same time, Burgs, whose firm has worked on projects for Poland’s military, began speaking with the Ukrainian Ministry of Defense about what they needed. He says he received classified files this week after passing the required security protocols that he expects to begin producing immediately.

The drones are particularly intriguing. They are observational drones, not offensive weapons. Their bodies can be created easily with the firm’s existing polymer printers, but the cameras and radios need to be attached manually, Burgs says. Production of the drones began last week and is currently going at a rate of about 50 a week.

What else the group might be able to do remains in flux. Burgs says that there are certain military items that the Ukrainian defense forces don’t want to share with the group since it is Polish rather than Ukrainian. “We are a foreign company for them, so they trust us, but not so much,” he says. “They are at war, and the infiltration by Russian spies is a lot so I completely understand that they have some fears about it.”

As the war goes on, one idea he has is to locate a container with 3D printers in eastern Ukraine, closer to where the parts they’re printing are needed than Lviv. “We are thinking we can put the machines into the container with the electricity aggregator and go near to the front lines to create the most-needed parts,” Burgs says, noting that such a strategy has been executed previously, including by the U.S. army in Afghanistan.

As for the bus and the printers in Lviv, the group has ideas for how to use them longer term as well. The bus, which can hold 70 people, was given to the Ukrainian Ministry of Defense to help move people to safety. Meanwhile, once the war ends, the printers could eventually be used for the education of a younger generation of students interested in the technology and to help reconstruct the country.

“The way we think about those machines is that they are not only valuable in the short term to produce the needed parts, but hopefully soon the Ukrainian people will be able to use them to rebuild the country,” Ciszek says.