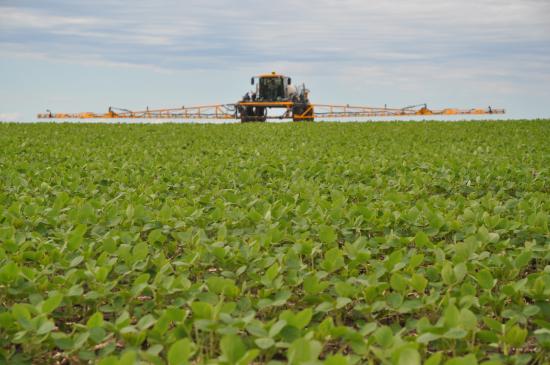 Greg Kruger pauses for what seems like an eternity during his presentation, but it actually just lasts six seconds.

The senior agronomist for BASF’s xarvio digital farming division did it to prove a point about BASF’s Smart Farming joint collaboration with Bosch that includes precision spraying technology the firms call Smart Spraying.

The strategy teams machine-learning algorithms with computer vision to enable “green-on-green” spraying that distinguishes between weeds and crops in-season. Kruger’s presentation was part of a BASF media briefing held before this week’s Commodity Classic in New Orleans.

“In the six seconds that I paused, we’ve taken 1,000 images [with Smart Spraying] on the boom,” says Kruger. “We have made 1,000 decisions on every single image on whether we should apply [herbicide] or what to apply.”

In a sense, it’s akin to the 4Rs in fertilizer management: Right source, right rate, right time, and right place. Kruger says the technology isn’t solely about saving chemistry, although it can do that.

Earlier this month, John Deere unveiled its green-on-green technology called See & Spray Ultimate, which company officials say will cut chemical use by two-thirds of that normally used in broadcasting applications that target both crop and weeds.

In May 2021, AGCO entered into a proof of concept (PoC) collaboration with Bosch, BASF Digital Farming, and Raven Industries to evaluate target spraying technology.

BASF and Bosch are testing 10 pre-series machines in Brazil, Europe, and North America, with more on the way. More testing will occur, with the firms aiming at a form of a commercial launch around mid-decade, say company officials.

To do so, sprayers in Smart Spraying feature:

The lighting units are particularly crucial in Smart Spraying. Even during the day, shadows resulting from the boom structure and other sources can interfere with weed identification, says Vincent Orliange, project director for Smart Spraying for Robert Bosch GmbH.

“If you have the sun coming in from the [sprayer] rear, you may have one part [of the image] very bright and another very dark,” he says. This could contribute to the sprayer missing a weed. The system’s high-intensity lighting can nix this and create a uniform image that enhances weed identification and targeted spraying, he adds.

That will benefit spraying applications, says Levi Ochsner, who farms with wife Jena and other family members near Sutton, Nebraska.

“You know that light will be the same every time,” he says.

“It is super-hot right now,” says Ben Voss, director of sales in North America and Australia for Raven Industries. “Smart spraying solutions cut herbicide use by over 70%, reducing costs and helping our customers be more sustainable.”

Voss expects widespread adoption in Australia, as they have wrestled with myriad herbicide resistance issues for years.

“Some of the major dealers there have told me they fundamentally believe that in five years, one half of the sprayers will have cameras on them,” he says.

Adoption in the United States will particularly appeal to farmers who want to boost return on investment, says Voss. Farmers want to make decisions based on data, and this system is one way to do it, he says.

“The Moneyball moment in agriculture is happening,” Voss says.