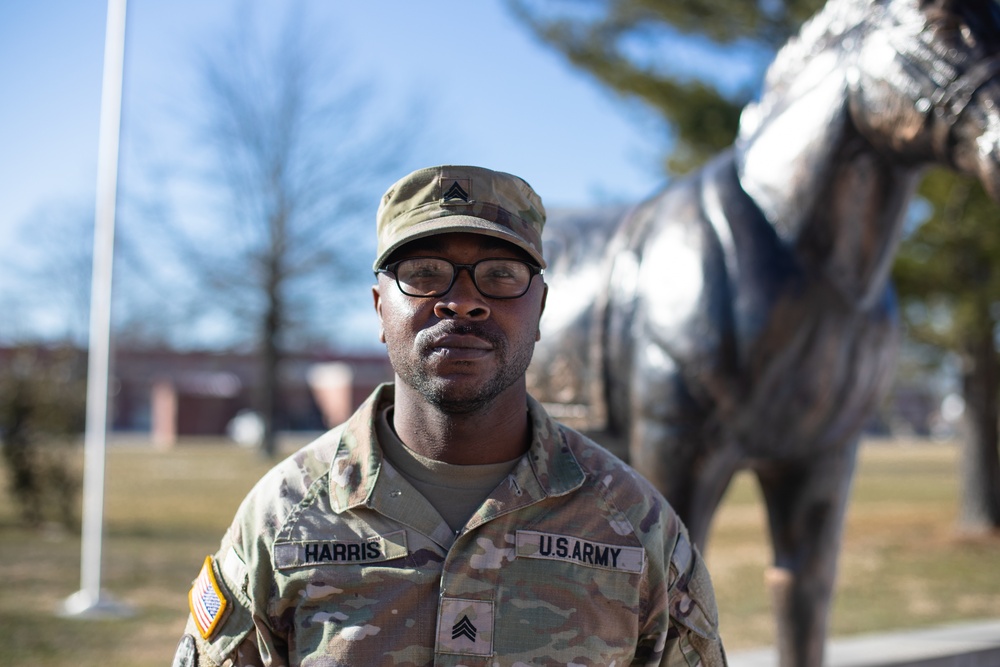 
FORT KNOX, Ky. – As he stood before the flag, the Georgia native raised his right hand and recited the Oath of Enlistment, signifying not only his commitment to service in the Army but also to his community back home.

Since 1976, the month of February has been designated as Black History Month – an annual celebration to recognize achievements made by Black Americans throughout history.

“Recognizing the accomplishments of Martin Luther King Jr., Rosa Parks, and George Washington Carver makes me want to become that activist and always do the right thing,” Harris said.

Growing up in an impoverished environment with little certainty, Harris relied heavily on his older siblings to guide his path to a stable future.

“Where I’m from, there’s nothing but drug and gang violence,” Harris said. “To keep me out of those situations, they always made sure I was in sports and academically inclined.”

Harris credits his siblings as his source of inspiration and for teaching him to remain headstrong through adversity.

From the lessons learned, Harris earned an academic and athletic scholarship to a high school an hour away in Valdosta, Georgia. The opportunity enabled him to escape the harsh realities of home and focus on a future.

Harris continued his education after high school and enrolled in college at Valdosta State University, where he graduated with a bachelor’s degree.

In 2010, Harris joined the United States Army as a military policeman, where he utilized his degree in criminal justice.

While on a deployment in support of Operation Enduring Freedom, Harris found the desire to do something more for his professional development and community.

Harris transitioned to his current military occupational specialty in 2014 and also earned his associate’s degree in computer science.

While making this transition, Harris decided to use some of his time off to travel back home and provide testimonials to young men and women in the area about the benefits and opportunities afforded by the Army.

“It’s an eye-opener for them because they see me in uniform and don’t think I’ve been through what they have,” Harris said. “But when I talk about my past, they see I can relate to them and show them a positive outcome.”

Now, having served for 12 years, the father of four has his sights on becoming a recruiter back home and making a difference.

“The main goal I have now in the military is becoming a recruiter to help kids leave that troubled environment,” Harris added. “Not only the troubled or Black kids, but anyone who wants help.”

Over the course of his life, Harris has followed the wisdom of Martin Luther King Jr. and uses one particular quote as a guiding principle that he also shares with those around him.

“Faith is taking the first step, even when you don’t see the whole staircase.”


This work, BlackJack Soldier honors Black History Month through selfless service, by SGT Jimmie Baker, identified by DVIDS, must comply with the restrictions shown on https://www.dvidshub.net/about/copyright.